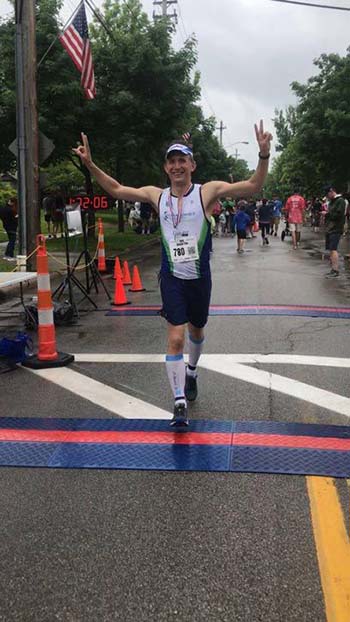 As runners crossed the finish line of the Blossom Time Run this past Sunday morning, they beat more than personal records. For every participant of the 5.25-mile run who came in before Dr. William Wiley, a donation of $1 was pledged by the ophthalmologist to the Chagrin Valley Jaycees.

Dr. Wiley, 47, of Chagrin Falls strutted across the finish line dead last knowing full well the benefit of his actions. With the official race results of 1,123 runners in, he plans to donate a total of $1,123 to the Jaycees.

“The Chagrin Valley Jaycees are all about helping people in the community. They work tirelessly to help our community shine around the different holidays and it was easy for me to help support their charitable efforts,” Dr. Wiley said on why he decided to donate the money. “I love to run, and I try to help people when given the opportunity. So this was an opportunity to do something fun, and I was able to give to a great cause at the same time.”

Thankfully now with technology, those patients can be very functional. They can use eye or facial movements to navigate the internet, navigate a TV or navigate even a wheelchair and things like that. But often if they cannot physically put glasses or contacts on, and if their glasses or contacts fall out, they’re in trouble,” Dr. Wiley said explaining why the patients would need the refractive surgery. He said the practice is more than happy to give free refractive surgery for those instances because “it’s just truly a huge lifestyle improvement.”

Dr. Wiley also drives two vintage 1960s ice cream trucks for the practice’s outreach program. He said with the ice cream trucks, which also made appearances at Blossom Time, he hands out free ice cream for donations toward the Cleveland Sight Center, which offers rehabilitation services so those who are blind or who have low vision can regain their independence.

Refractive surgeries (like Lasik) are meant to get people out of wearing glasses or contact lenses through surgical corrections, Dr. Wiley said. He explained that Lasik surgery usually involves creating a flap in the cornea of the eye, treating underneath it and changing the shape of the eye so people with glasses or contacts can see without those visual aids.

Standard cataract surgery, on the other hand, just removes the fog of the eye’s lens – sometimes replacing the lens with an artificial one – but patients may still have to wear glasses to correct any near- or far-sighted vision they may have, Dr. Wiley said.

By bringing both arms under one roof, we were able to take the laser type technology (of Lasik eye surgery) and add it to the cataract surgery and thus have better outcomes with our cataract surgery,” he said explaining how the two technologies came together. In the same regards, he added that he was able to apply the lens-type surgery involved in cataracts to Lasik surgeries, which expanded the procedure to those who originally could not receive it due to thin cornea tissue, high prescriptions or other eye problems.

Dr. Wiley said he was able to make the advances in the surgeries through Clear Choice because of Lasik being the main focus of the center and having a surgical team dedicated to refractive surgeries. “If you’re only dabbling in Lasik, the technology can be expensive to maintain and invest in,” he said.

Dr. Wiley explained how two laser platforms, out of the four the practice offers, helped make the surgeries safer and quicker.
We have four different laser platforms on site as opposed to some centers that might only have one platform,” he said of refractive surgeries such as the ORA System and SMILE.

“[ORA] allows us to have more precision when I’m picking and choosing the lens and then placing the lens. And it helps guide the choice of the proper lens,” Dr. Wiley explained. This system, he said, increased the accuracy and precision of cataract surgery and allowed more confidence in patients and doctors.

SMILE (Small Incision Lenticule Extraction) is where we do a similar technique (to Lasik surgery), but we do it through a small pocket where we’re removing tissue through a pocket, and thus it’s not quite as invasive,” Dr. Wiley said and added that patients can get back to normal activity sooner after the procedure.

Dr. Wiley was even able to apply the changes he made to cataracts surgery to the Akron Zoo’s golden lion tamarin monkey named Ana in 2017. The veterinarian ophthalmologist diagnosed Ana with cataracts in both of her eyes, but was unable to perform the surgery with the monkey’s eyes being too small for the tools available.

“We brought my whole team down to the Akron Zoo and in front of a glass window where visitors were walking by – and my kids were outside watching through the window and watching their dad do cataract surgery on a monkey,” Dr. Wiley said. He added on the difficulty of the procedure because of how small the monkey was, but he was able to perform the surgery and remove the cataracts from both of her eyes and Ana was able to ambulate throughout the cage independently after the surgery.

As for the race, Dr. Wiley said it was “liberating” to come in last

“It was a decision made on the course after a friend cheering from the side said, ‘You should slow down so you can donate more.’ With that I thought, ‘If I come in last it will maximize our contribution.’ Thus equating coming in last to doing something good for someone else, which [is] so different than the usual pressure that we all feel in our day-to-day lives.”

We Are A Proud Partner Of